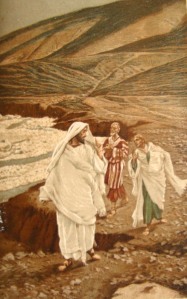 There’s not much said about the apostles in the New Testament; they walk in the shadow of Jesus. Because of that, we have only a few details about Andrew, the brother of Peter, whose feast is today.

One detail is his name, Andrew, a Greek name, which may be due to the fact that the area around the Sea of Galilee was multi-cultural and Jewish families sometimes took gentile names.  His family was from Bethsaida where a lot of trade went on. Did Andrew speak some Greek?

Maybe he did, because later in John’s gospel he and Philip bring some Greek pilgrims to Jesus before his death. Jesus sees their coming as a sign of his approaching passion and glorification and he rejoices. (John 12, 20-28) We have to be careful of seeing Jesus’ apostles as poor uneducated fishermen, not likely to get along in a bigger world.

Andrew must have been religious. Early in John’s gospel, he’s described as a disciple of John the Baptist who points Jesus out to him. Jesus then invites Andrew and another disciple to stay for a day with him. “Come and see.” Afterwards, Andrew “found his brother Simon and said to him ‘We have found the Messiah.’” (John 1,35-41)

The Greek Church honors Andrew as its patron and considers him the first apostle because he was the first to see Jesus and follow him; then he called his brother. Tradition says Andrew was crucified on the beach at Patras in Greece and during his martyrdom extolled the mystery of the Cross of Jesus. He’s also the patron of Russia and Scotland.

A number of saints and feasts are celebrated during Advent. Certainly, saints like Andrew belong in our celebration of the Incarnation.  Jesus, the Incarnate Word, drew people to himself who, in turn, drew others. His grace can’t be contained.