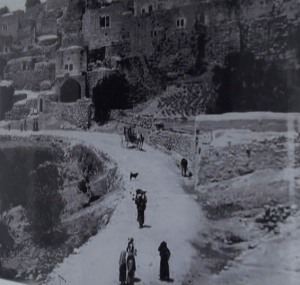 The gospels of Mark, Matthew and Luke report that Jesus began his entry to Jerusalem on Palm Sunday at Bethphage and Bethany on the Mount of Olives. From here he went into the city of Jerusalem seated on a donkey and those who followed him threw olive branches before him, crying, “Hosanna to the Son of David, blessed is he who comes in the name of the Lord, hosanna in the highest.”

From the roof of the Passionist house in Bethany you can see the eastern slopes of the Mount of Olives looming ahead; the road winds over the crest of the mount down the other side past the Garden of Gethsemani and into Jerusalem. We walked part of the road last week. 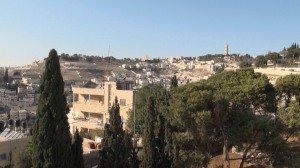 The area around  Bethany was probably sparsely populated at the time of Jesus and into the Christian era. During great feasts, the poorer pilgrims would stay in the area, probably pitching tents up in the olive groves, and walk to the city. Here are two pictures from the 1940‘s when the area was less populated, today it is Muslim.

After Constantine established the church in Jerusalem and built churches like the Church of the Holy Sepulcher in the 4th century, vast crowds came here on Palm Sunday to reenact the gospel. They probably began near here to go their way into the city to the empty tomb .

Fr. Roberto tells me the procession today for the Latin church goes through St. Stephen’s Gate and ends in the Church of St. Ann.

Our Palm Sunday celebration today in the Roman rite imitates the ancient practice of the Church of Jerusalem, as well as many other of its Holy Week rites as well. We follow our ancestors in faith in sign. Before our Palm Sunday procession we hear these words:

“Let us remember with devotion this entry which began his saving work and follow him with  lively faith. United with him in his suffering on the cross, may we share his resurrection and new life.”

Don’t forget, however, that the little procession we have in our churches today once stretched over some tough hills and went for a distance.

In the garden behind the Passionist house are some first century ruins of a few Jewish houses from the time of  Jesus. Outside one is  a mikvah for purifications. Not far away is the Franciscan church next to the traditional site of the tomb of Lazarus. Who knows? Could they have lived here? It looks like its part of the ancient village of Bethany. 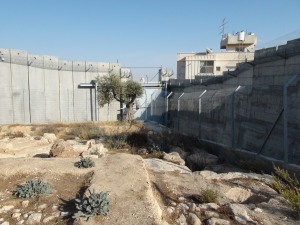 In back of the site is the famous security wall which runs through the Passionist property. More about that later.