Mary, the mother of Jesus, is an important figure in Advent and Christmas Time. She’s known mostly from events of this time, in  fact. The angel visits her at Nazareth, she visits  her cousin Elizabeth, the birth of Jesus in Bethlehem, the coming of the Magi, the flight into Egypt, the presentation of the Child Jesus in the temple, the finding of the Child Jesus in the temple after his loss for three days. All these events are  recorded in Luke and Matthew’s gospels.

We remember them especially on the Feast of Mary, the Mother of God. (January 1st)

The gospels offer only a sketchy profile of Mary because they focus on Jesus, her Son. She’s a witness to his humanity and divinity. “For us and our salvation he came down from heaven, and by the Holy Spirit was incarnate of the Virgin Mary and became man.” (Creed)

By taking a body “truly like our own” and accepting “from Mary the frailty of our flesh,” Jesus humbled himself, assuming the limitations that come from being human. Mary is his way, giving him birth, nursing him as a infant and raising him as a child.

“Can anything good come from Nazareth?” For 30 years Jesus led a hidden life in the silence of that small town in Galilee. Mary was his companion. “I confess I did not recognize him,” John the Baptist says twice when Jesus comes to the Jordan to be baptized. (John 1,29-34) His own in Nazareth did not recognize him either.

He went unrecognized, and so did Mary, who shared his hidden life. She performed no miracles, did not publically teach; no angel came again after the first announcement to her.

We can pass over the Hidden Life that Jesus embraced too quickly, I think, even though the Christmas mystery tells us of it. We forget that to be transformed into glory means accepting “the frailty of our flesh,” which  Jesus accepted it to raise it up.

“…though invisible in his divine nature, he has appeared visibly in ours;
and begotten before all ages, he has begun to exist in time;
so that, raising up in himself all that was cast down,
he might restore unity to all creation
and call straying humanity back to the heavenly kingdom.”
(Preface II of the Nativity)

St. Mary Major is the main church in Rome dedicated to Mary, the Mother of God. You can visit it in the video above. It’s also called “Bethlehem in Rome” because many of the Christmas mysteries were first celebrated there and relics from Bethlehem were brought to it after the Moslem invasion in the 8th century. 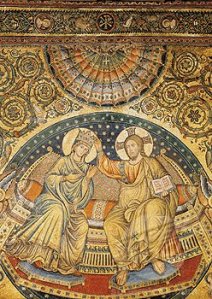 The great mosaic of Mary in heaven crowned by Jesus, her Son, stands over the altar in the church as its focal point. She was his companion in his hidden life; he raised her up through the mystery of his resurrection.

2 thoughts on “Mary, the Mother of Jesus”