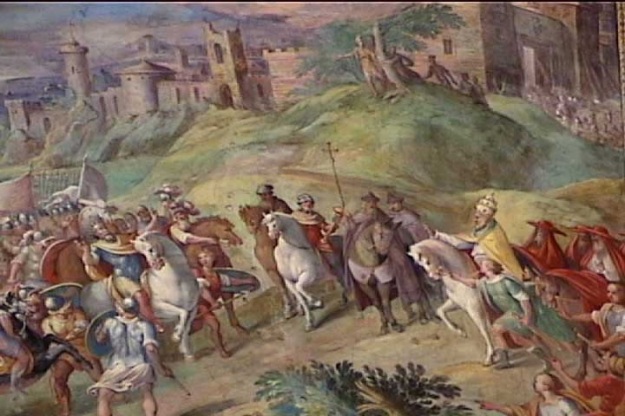 Today’s the feast of St. Leo the Great, a 5th century pope buried in St. Peter’s Basilica in Rome in the front of the church on the left side of the main altar.

The large picture over his tomb pictures him outside Rome before Atilla, the Hun, and his warriors who are ready to attack and plunder Rome in 452 AD. Previously, a Vandal attack in 410 AD shocked a city that thought itself impregnable.

Barbarian tribes were pouring through Rome’s defenses along the Rhine River and its northern frontier then, threatening the Italian peninsula. Most of Rome’s elite left for the safety of Constantinople, the new center of the empire. The rest of the population, convinced the world was ending,  retreated to their homes with everything they had. No one wanted to fund an army for the city’s defense.

Leo became Rome’s defense, persuading Atilla to leave the city untouched by offering him tribute money. A few years later, though, in 455 AD he was less successful when the Vandals returned to plunder the city for 14 days.

Yet that’s not why Leo’s called great. A holy, learned man, he saw the church’s best defense in knowing Jesus Christ and the mysteries of his life, death and resurrection. His sermons on the Incarnation,  preached in the course of the church year, urged  Christians to find strength by living as  Jesus did.

As bishop of Rome and successor to the Apostle Peter, Leo believed in the future of the church, as Jesus promised to his apostle Peter. He led the bishops of the western church and  asserted the authority of the bishop of Rome in the councils called by the universal church, particularly the Council of Chalcedon in 451 AD.

In times of great suffering, like Paul the Apostle in his Letter to the Philippians, Leo found support in the Passion of Jesus Christ. Here’s one of my favorite quotes from him:

“True reverence for the Lord’s passion means fixing the eyes of our heart on Jesus crucified and recognizing in him our own humanity…Who cannot recognize in Christ his own infirmities? Who would not recognize that Christ’s eating and sleeping, his sadness and his shedding of tears of love are marks of the nature of a slave?

“It was this nature of a slave that had to be healed of its ancient wounds and cleansed of the defilement of sin. For that reason the only-begotten Son of God became also the son of man. He was to have both the reality of  human nature and the fullness of the godhead.

“If then we walk in the way of his commandments, and are not ashamed to acknowledge the price he paid for our salvation in a lowly body, we too  rise to share his glory. The promise he made will be fulfilled in the sight of all: Whoever acknowledges me before others, I too will acknowledge him before my Father who is in heaven.”