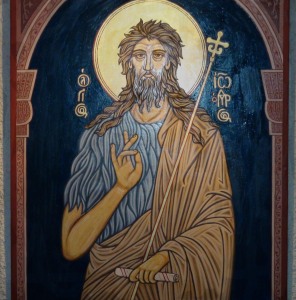 John the Baptist may look and sound  forbidding, but don’t let appearances put you off. He spoke in the wilderness, where looks are not important and you can’t keep up appearances. The wilderness symbolizes the hard places we all must pass through.

So we shouldn’t deny they exist. Or think a simple sentence will take them away. I suppose that’s why I prefer John the Baptist to Joel Osteen.

John’s father was Zachariah, a priest in the temple, a much more secure place to be. He told John: “You, my child shall be called the prophet of the most high, for you will go before the Lord to prepare his way.” (Luke 1) God called John to the wilderness to show people the way to God from there.

The Judean wilderness where John the Baptist baptized lay about 15 miles east of Jerusalem in the Jordan Valley north of the Dead Sea. Pilgrims from the north took an ancient road along the River Jordan and followed it as it veered right near the town of Jericho to ascend steeply about 3,500 feet up to the Holy City, about an 9 hour walk. A tough road in itself to travel.

Near where the road begins to ascend, John baptized great crowds in the river’s refreshing waters. He baptized Jesus and his disciples in these waters and then pointed Jesus out as “the Lamb of God” and told his followers to follow him as their Shepherd and Way.

music on John the Baptist.