We celebrate the Feast of Ann and Joachim today, parents of Mary, the Mother of Jesus.  The New Testament says nothing about them, but an early 2nd century document called the Gospel of James tells their story,

Ann and Joachim lived in Jerusalem, the ancient source says, where Joachim, a descendant of David and a wealthy man, provided sheep and other offerings for the temple sacrifices. The two had ties to Bethlehem nearby and Nazareth in Galilee.

They were well off but for twenty years disappointment clouded their marriage: they had no child. Even after vowing to dedicate their child to God, no child came. And so, at a time when children were treasured, they were thought poor. Descendants of David, they were blamed also for failing to continue the line the Messiah would come from.

Stung by criticism, Joachim spent more time in the mountains, brooding among the shepherds and their flocks. As her husband distanced himself from her, Ann too grew sad. God seemed far away.

In the garden one day, noticing some sparrows building a nest in a laurel tree, Ann burst into tears: “Why was I born, Lord?” she said, “birds build nests for their young and I have no child of my own. The creatures of the earth, the fish of the sea are fruitful, and I have nothing. The land has a harvest, but I have no child  in my arms.”

At that moment, an angel of the Lord came and said, “”Ann, the Lord has heard your prayer. You shall conceive a child the whole world will praise. Hurry to the Golden Gate and meet your husband there.”

At the same time, In the mountains an angel in dazzling light  spoke to Joachim, “Don’t be afraid, the Lord hears your prayers. God knows your goodness and your sorrow and will give your wife a child as he did Sara, Abraham’s wife, and Anna,  mother of Samuel. You  will have a daughter and name her Mary. Give her to God, for she will be filled with the Holy Spirit from her mother’s womb.  Go back to Jerusalem. You’ll meet your wife at the Golden Gate and your sorrow will turn into joy.”

Joachim and Ann met at the Golden Gate to the temple, the place of God’s presence. They embraced as they spoke of the angel’s promise. Returning home, Ann conceived and bore a daughter, and they called her “Mary.”

When she was three years old, Ann brought Mary to the temple to learn the scriptures, to pray and take part in the Jewish feasts. She watched her father bring lambs to be offered in sacrifice. She grew in wisdom and grace in God’s presence.

When Mary approached marriage age– then 15 or so–her parents arranged for her marriage as it was customary. They sought the high priest’s advice, tradition says, and Joseph of Nazareth was chosen as her husband. Nazareth was then their home.

The angel Gabriel appeared to Mary and announced that she was to be the Mother of Jesus. By the power of the Holy Spirit she conceived the Child.

After Jesus was born in Bethlehem, Mary and Joseph returned to Nazareth where Jesus grew up. He was raised in a large extended family that included his grandparents, Ann and Joachim, who cared for him as a child.

No one knows just when or where Ann and Joachim died, but Jesus must have treasured them in life and on their passage to God.

The 2nd century Protoevangelium of James repeats a fundamental theme of  the Book of Genesis: God promises Adam and Eve many children who will enjoy the blessings of the earth. God repeats the promise to an aged, childless couple, Abraham and Sarah, and again to Anna, who bemoans her childlessness to the priest Eli in the temple. In the same way, God gives a child to Ann and Joachim. Mary, their daughter, brings blessings to the nations through her son Jesus Christ, born of the Holy Spirit.

Giotto’s 14th century illustrations (above) from the Arena Chapel in Padua. helped popularize the story of the parents of Mary in Italy, Europe and the rest of the western world.

It’s an important story for grandmothers and grandfathers. Like Ann and Joachim they have a big role raising the next generation.

I mentioned previously that the 11th and 12th chapters of Matthew’s gospel, which we’re reading during the novena, deal with the growing opposition to Jesus as he preaches and performs miracles in Galilee. A rather dark section of the gospel.

Jesus is opposed by the Pharisees, who now take “counsel against him to put him to death” (Matthew 12.14). They’re not satisfied with his teachings and miracles and demand a sign. He offers the sign of Jonah. He will enter the mystery of death and will rise again. This is his greatest sign.

Jesus also is rejected by “this generation” of Israelites, the towns “where most of his mighty deeds had been done.” Corazin, Bethsaida, Capernaum. (Matthew 11,16-19) They’re like the rocky ground Jesus spoke of in his parable of the sower. They received him first but later forget him “because the soil was not deep.”

Concluding this section, Matthew adds another source of opposition to Jesus that may surprise us. His own family from Nazareth seems to oppose him.

“While he was still speaking to the crowds, his mother and his brothers appeared outside, wishing to speak with him.

[Someone told him, “Your mother and your brothers are standing outside, asking to speak with you.”]*

But he said in reply to the one who told him, “Who is my mother? Who are my brothers?”

And stretching out his hand toward his disciples, he said, “Here are my mother and my brothers.

For whoever does the will of my heavenly Father is my brother, and sister, and mother.” (Matthew 12,47-50)

We need to remember something about family life at the time of Jesus to appreciate this gospel. It’s safe to say that in Jesus’ day nuclear families did not exist. A nuclear family is a mother, father and children, and it’s a modern form of family life. In Jesus day families were extended families or clans, who lived and worked together.

For this reason, the picture we sometimes have of the Holy Family– Mary, Joseph and the Child Jesus all by themselves in a small house in Nazareth– is not a realistic picture. Families in Nazareth, as we know from the excavations at Capernaum, lived in compounds. People lived together in those days, as they often do today in the Middle East and elsewhere, working together in the fields or in a business and offering each other support. 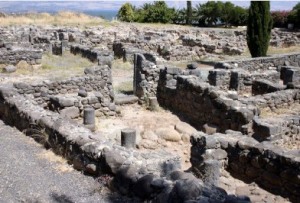 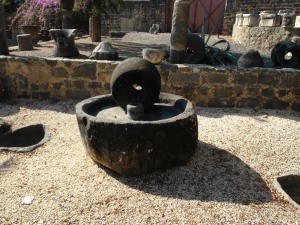 You were obliged to be loyal to your extended family or clan in Jesus’ day. Everyone had to help in the harvest; you were expected to promote your family’s interest. The mother of James and John who approached Jesus looking for a good place for her sons in his kingdom was only doing what she was expected to do.

What we see in this gospel is the extended family of Jesus descending on him as he is speaking to the crowds to remind him of his family obligations. What did they want to remind him of, we wonder? Were they off to a wedding or a funeral of a relative and were telling him to come along? Or, was the wheat harvest ready at Nazareth and they came looking for help? Or, they just wanted him for themselves for awhile?

Whatever it was, Jesus said that his family was the crowd before him and there he was meant to be.  “ I belong here now,” Jesus seems to be saying to them. The kingdom of God, God’s family, God’s purpose, is greater than his family’s interests.

Today, of course, individualism is our predominant value, and it often stands in the way of family interests. It’s what “I” want that counts. But still today, family interests, family pressure can be strong and can get in the way of what God wants. Sometimes those closest to us, like our family, can be hard to manage, even though they want the best for us.

Jesus experienced that too. 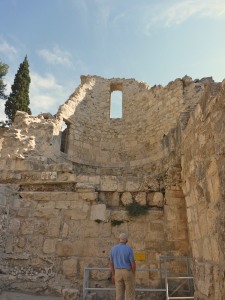 Devotion to St. Ann began in Jerusalem, probably at a 5th century basilica near the pool of Bethesda, where Jesus cured the paralyzed man waiting to get into its healing waters. Ruins of the basilica can be seen today in the ruins of the Bethesda pool. The present basilica of St. Ann, begun in the 12th century, stands nearby.

Would the early basilica be near the place where Joachim and Ann lived in the city, or was its site chosen for convenience? The ancient stories of the Protoevangelium associate Mary’s family with the temple and describe Joachim participating in the temple sacrifices. I wonder if we dismiss these stories too quickly as “myths.”

The Protoevangelium says that Mary was presented in the temple and dedicated to God as a child. At the least, this indicates that Mary would be well acquainted with the temple, its worship and the teachings of Judaism. If we accept this reconstruction, Mary would be far from a peasant girl from Nazareth. She would be better formed in Judaism and particularly in temple worship than we sometimes think.

Mary’s family was related to the family of John the Baptist, whose father Zachariah is a priest in the temple. (Luke 1,3-25) They live in the hill country near Jerusalem. Mary’s visit before Jesus’ birth to Elizabeth, Zachariah’s wife, connects her closely with them.

Later, as a young boy Jesus engages the teachers of the law on a pilgrimage to Jerusalem. (Luke 2,41-52) He amazes them with his wisdom. Could some of that  wisdom have come from a mother’s teaching?

“And Jesus advanced in wisdom and age and grace before God and man,” (Luke 2,52)

Mary and Joseph, Ann and Joachim certainly contributed to his growth.

Today at the novena, I’m going to talk about how Mary and Ann may have taught Jesus about the temple and what to do there. Like them, we must pass on our faith to others, particularly to the next generation.

For most of our novena the gospel readings at Mass are from the 11th and 12th chapters of Matthew’s gospel, which deal with the growing opposition to Jesus as he preaches and performs miracles in Galilee. It’s a rather dark section of the gospel.

Jesus is opposed by the Pharisees, who now take “counsel against him to put him to death” (Matthew 12.14) and by “this generation” of Israelites, the towns “where most of his mighty deeds had been done.”  (Matthew 11,16-19). He meets little success.

Concluding this section, Matthew adds another source of opposition to Jesus that may surprise us. His own family from Nazareth seems to oppose him.

Yet, in this bleak section of the gospel, when so many turn against him, Jesus praises his Father, Lord of heaven and earth, “for although you have hidden these things from the wise and the learned you have revealed them to the childlike.”  (Matthew 11,25)

He praised those who have the spirit of the child and keep it. Certainly, St. Ann taught her daughter Mary that spirituality. On this day of the novena, we will  reflect on it.

St. Leo the Great, an early pope, said that becoming like a child– remember Jesus told his disciples to become like little children– does not mean going back to infancy physically. It means, like children, to be free from crippling anxieties, to be forgetful of injuries, to be sociable, and to wonder before this world.