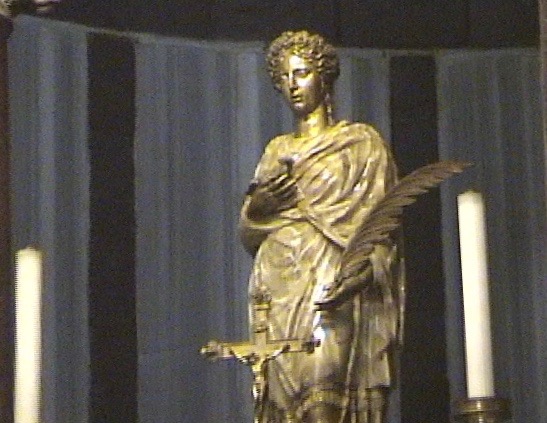 Agnes, one of the most popular Roman women martyrs of the 3rd century, is among the seven  women mentioned in the 1st Eucharistic Prayer:  “Felicity, Perpetua,  Agatha, Lucy, Agnes, Cecilia, Anastasia.” She’s honored in a special liturgy in the Liturgy of the Hours.

Her story appears in legendary 5th century sources, but some basic facts about her seem historically reliable. Agnes was a beautiful, wealthy 13 year old girl chosen to be the wife of an influential Roman man, but she refused to marry him because she believed as a Christian she had the right to remain unmarried. A deeply religious young woman, she wanted to give her life to God.

That wasn’t an option for Roman women then. Women were expected to marry young, to marry men chosen for them, and to have two or three children. Rome needed citizen soldiers then to grow and hold on to its empire. Only reluctantly did Rome come to depend on foreigners for its fighting. It preferred its own men and wanted its own women to produce them.

When Agnes refused to marry, she went against Roman expectations. She was also a Christian and since she lived in times influenced by Diocletian, a notorious enemy of Christianity, she was a target of religious persecution. They pressured her to give up her beliefs; when she refused they declared her an enemy of the state.

Tradition says the authorities brought her first to the Stadium of Domitian, to a brothel of prostitutes there, to commit her to a life of degradation, but God kept her from harm. She would not yield, and so they took her to the arena and killed her by slitting her throat. Those who saw her die marveled at her courage and her faith.

Commentators like St. Ambrose, writing afterwards about Agnes, marveled at the young girl’s bravery. In Roman households of the best kind, young girls were protected and not expected to speak for themselves. Here was a young girl who stood up to the Roman establishment, even till death. How did she do it ?

“God chooses the weak to confound the strong” the prayer for the Mass of St. Agnes says.  She confounded the way Roman Christians thought about holiness. Men like Peter and Paul and other disciples of Jesus, soldier saints like Sebastian, who witnessed to the faith by dying for it were  the usual measure of holiness then. Devotion to Mary, the Mother of Jesus, grew later in the 4th century, as disputes took place about the human nature of Jesus. In Agnes’ time women were hardly seen or heard.

Agnes and women martyrs like her redefined the way early Roman Christians thought about holiness. Women, even young girls, could be heroic witnesses to the Jesus Christ.

Agnes was buried in the catacombs along the Via Nomentana outside the walls of the city and has been honored there ever since. A majestic ancient church stands over her grave. Another 16th century church honoring her in on the Piazza Navona, where the Stadium of Domition once stood and the young girl endured great suffering.

Some say the 1st Eucharistic Prayer mentioned above goes back to the 6th century pope, St. Gregory the Great, whose family home was on the Celian Hill in Rome, Some also say his mother and aunt may have promoted the women listed in that prayer, all strong women who died for their belief.

One of the new Eucharistic prayers asks us to see “the signs of the times by the light of faith.” What’s the role of women in our times and in our church?

Wonderful churches to visit, if you go to Rome. 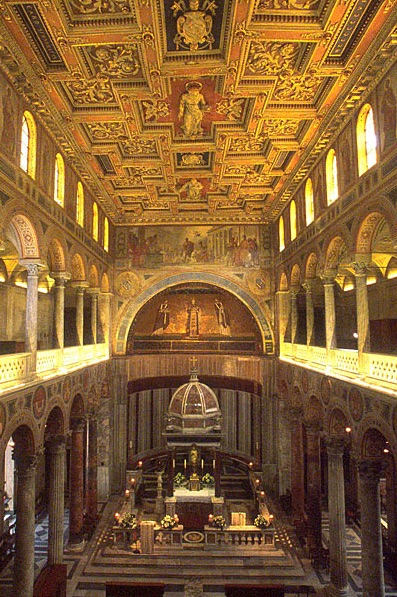