News reports today on the tomb of Paul at Saint Paul Outside the Walls say the bones come from someone from the first or second century, buried with honors. We were in the basilica last November where greater access has been provided to go down beneath the main altar and reverence the tomb. 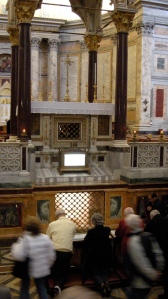 On the Vatican site, you can now take a visual tour of the necropolis underneath St. Peter’s Basilica and see the tomb of Peter. It’s a favorite tour for pilgrims, but because of space visitors are limited. This visual tour is a great alternative.